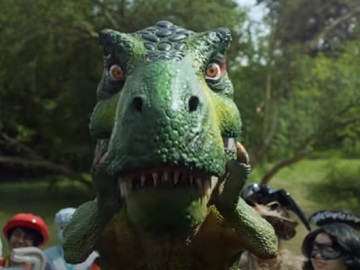 LEGO has launched its holiday campaign, titled “Rebuild the World” and described as “a celebration of the creative power and optimism that children possess”.

The film, created by the LEGO Group’s internal agency, the LEGO Agency, features a diverse cast of children from across the world playing with various LEGO products. They build, unbuild and rebuild, imagining a world with blue horse, hotdog trees, where princess knights calm dragons, astronauts celebrate their marriage with dinosaurs and giant chicken, police chase crooks on a race through the world, a Star Wars AT-AT takes a nap in the middle of a fight to save the Galaxy, and more.

The children also dream of making art with dots on every door and of having, instead of walls, dancefloors, where they would dance to this song.

Serving as soundtrack is a reimagining of the iconic What a Wonderful World, with the instrumental part recorded with the City of Prague Philharmonic Orchestra.

The “Rebuild the World” campaign runs across a variety of channels, including TV, digital, Spotify, out of home, e-commerce channels and in LEGO stores.