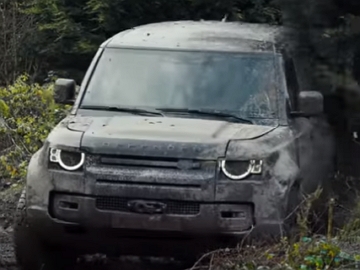 Land Rover has released a new commercial, featuring the new Land Rover DEFENDER flying into action in rehearsals for NO TIME TO DIE, in cinemas from April 2.

The 60-second spot, titled “Unstoppable,” features the new Defender and Range Rover Sport SVR in rehearsals for the 25th James Bond film, as it was tested by the stunt team, who pushed it to the limits. The voiceover presents the SUV as having an iconic shape that never fails to make an impact. “Made for adventure, the Defender will stay composed whatever the day throws at you. And if you venture off the beaten track, it remains a short, no matter the circumstances. Designed with purpose and though enough to take on any unexpected surprises, the Defender is as at home on the road as it is off,” the voiceover also says throughout the ad, which is scored by The James Bond Theme by The John Barry Seven & Orchestra.

Onscreen lines inform, at the end of the commercial, that No Time To Die will open in theaters April 2020.

“No Time To Die” follows James Bond as he gives up his tranquil life in Jamaica when his old friend Felix Leiter from the CIA turns up asking for help. He embarks on a mission to rescue a kidnapped scientist, but this turns out to be far more treacherous than expected leading Bond onto the trail of a mysterious villain armed with dangerous new technology.