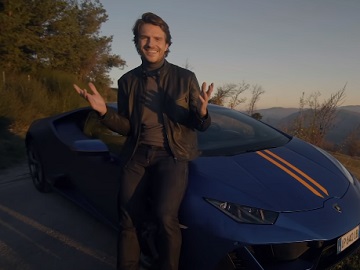 Lamborghini has released its Christmas commercial, reminding us that “Nothing can stop real love”.

The spot, titled “The Christmas Gift,” features an old man who receives an unexpected Christmas gift: a VR headset which he puts on slowly, not knowing what to expect. He is then transported into a Lamborghini and enjoys a ride in the company of his son, Matt, who – it turns out – had also sent a Christmas card, along with the headset, saying “Hey Dad. Our passion is stronger than distance. I love you”.

Last year, the Italian supercar manufacturer, who searches, every year, real Lamborghini lovers, gave a black Aventador to Sterling Backus and his 12-year-old son Xander for two weeks to drive during the holiday season.

Backus’ efforts of making a 3D replica of a Lamborghini in his garage, in order to fulfil his son’s wish, got the attention of the automotive company, which decided to lend the car to them.