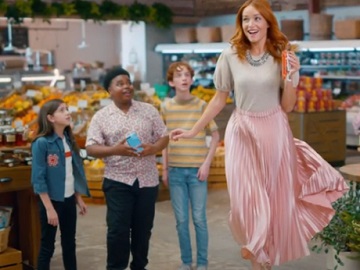 Kinder Bueno, part of the portfolio of brands by Ferrero U.S.A. Inc., the confectionery company also known for Kinder Joy, Ferrero Rocher chocolates, Tic Tac mints, Nutella, Butterfinger, and other treats, is advertised in a commercial that introduced the tagline “Life Gets Bueno”.

The spot features a customer in a grocery store (played by actress Sierra Love) trying Kinder Bueno and being so captivated by the candy bar that she begins levitating under the eyes of several other customers. Some of them, a group of three kids, more precisely, are so shocked they want to immortalize the scene by filming her, but the voiceover aks them to not ruin her moment.

The commercial ends with the brand’s new tagline, “Life Gets Bueno,” flashing across the screen.
The ad, which debuted during the 92nd Oscars broadcast on February 9, 2020, marks the third consecutive year Ferrero U.S.A.

Inc. has advertised a Kinder brand during the award show.

Kinder Bueno was introduced into the U.S. market in the fall of 2019. On the occasion, the brand created an immersive pop-up experience in New York City, which included interactive rooms, drool-worthy stations, and hidden treasures and enabled thus consumers to take a journey through the flavors and textures of the delicious treat.

Previous: Fitbit Versa 2 Blue Whale Commercial
Next: Fridays for Future Our House Is On Fire Commercial