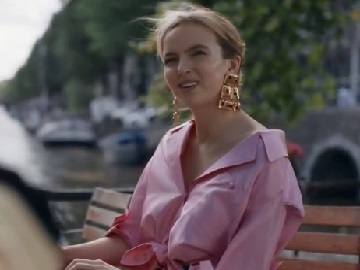 Ketel One advertises its vodka in a new commercial, featuring mixologist Fanny Chu.

The spot features Fanny, who is also a huge fan of the hit series “Killing Eve” (starring Jodie Comer and Sandra Oh), crafting up a Ketel One Vodka and Soda cocktail inspired by the Comer’s character (Villanelle) fashion and the marvelous use of colors in her wardrobe. However, the drink comes with a twist: it features a show-stopping rhubarb ribbon and basil garnish. “Because just like Villanelle, this drink will surprise you,” Fanny adds at the end of the commercial.

The voiceover urges viewers to drink marvelously and not miss the new episodes of “Killing Eve,” airing on Sundays at 9PM on BBC America.

Ketel One Vodka, named after the distillery’s original copper pot still (note: Dutch distillers refer to pot stills as ketels), is made at the historic Nolet Distillery in the Netherlands and is crafted from 100 percent wheat in copper-pot stills. Labeled “the world’s best-selling premium vodka,” it is available in several varietes, including Original, Citroen, Oranje, and 325th Nolet Anniversary, which is a commemorative bottle of Ketel One Vodka to celebrate the 325th anniversary.

Tags: Ketel One, Ketel One Commercial