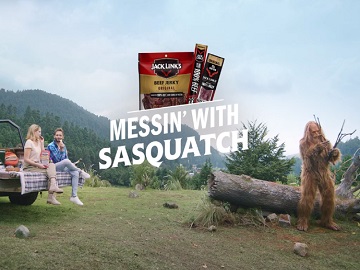 The spot features a young couple enjoying a snack outdoor, in the middle of nature, until the guy decides to mess with Sasquatch. He shoots a champagne cork at the iconic mythical man-beast, who has an unexpected reaction: launches a beaver at the man and ruins their picnic. Jack Link’s encourages consumers to feed their wild side with Jack Link’s meat snacks.

“Don’t mess with other snacks. Choose Jack Link’s jerky, made with 100% beef,” the voiceover says at the end of the commercial.

Sasquatch has been featured in several other ads for the brand of beef jerky. The “Runnin’ With Sasquatch” campaign, which debuted during 2018 Super Bowl, highlighted that, “In life, you either run with Sasquatch and eat the protein of Jack Link’s Jerky or you run from Sasquatch”, who “is and will always be faster than you”. He has also shared the screen with Minnesota Timberwolves player Karl-Anthony Towns, doing calf raises.