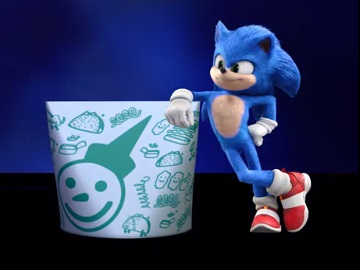 Jack in the Box has released a new ad, promoting its new Tiny Tacos and the upcoming animated sci-fi adventure film Sonic The Hedgehog.

The spot features the movie main character, the blue anthropomorphic hedgehog from another world, who can run at supersonic speeds, as he shows up near a bucket filled with Tiny Tacos, which are – according to the Jack in the Box, his new food obsession.

The fast-food chain’s menu item is available nationwide since January 16. Customers can order 15 Tiny Tacos for $3 or Loaded Tiny Tacos for $4, which are topped with cheese, lettuce, and taco sauce. However, prices may vary. The brand’s Creamy Avocado Lime sauce was also brought back to the menu.

Directed by Jeff Fowler (in his feature directorial debut), Sonic The Hedgehog stars Ben Schwartz as the voice of Sonic the Hedgehog, Jim Carrey as the tyrannical roboticist Dr. Robotnik, hired by the government to hunt Sonic down, James Marsden as ex-SFPD officer-turned-Green Hills sheriff Tom Wachowski, who helps Sonic in his quest to evade capture, Tika Sumpter, Adam Pally, Frank C. Turner, and more.

Initially slated for the US release on November 8, 2019, the film was delayed to February 14, 2020, after an overwhelmingly negative reaction to the first trailer. Sonic, whose original design drew the most criticism, was subsequently redesigned.