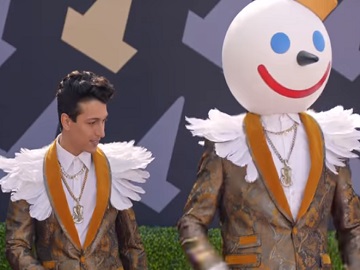 Jack in the Box has released a new commercial, urging people to hit the drive-thru for its new Popcorn Chicken Combos, available in both Classic and Spicy.

The spot opens with a young star on the red carpet making quite an entrance with his outfit, which features some feather wings. “When drama pops off” an onscreen line reads as he’s about to give an interview to the lady in black with the microphone. He says he’s original and one-of-a-kind but a few seconds later the fast-food chain’s mascot, Jack, shows up wearing the exact same outfit. At this point, the presenter takes out a box of Popcorn Chicken to watch the “faceoff”.

The commercial ends with the voiceover saying “Wherever drama pops off,” introducing then the Popcorn Chicken Combos, available only at Jack in the Box.

Food & Drinks
Previous: University of Phoenix Commercial: Online, But Never On Your Own
Next: Royal London Toy Wall Crawler Advert