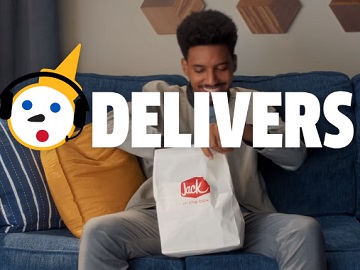 Jack in the Box has dropped a new ad, highlighting that, whether you’re making the most of “staying in the box” by bingeing a weird docuseries, playing video games until you break your high score, or becoming an “influencer,” you can get your favorite Jack in the Box classics ordered via UBER EATS, POSTMATES and GRUBHUB.

“When you need it, Jack delivers,” the voiceover says on the 15-second spot, urging viewers to order on UBER EATS, POSTMATES or GRUBHUB.

In the past few weeks, other fast-food restaurant chains have also released commercials to inform that they deliver. Some of them offer dree delivery. Burger King, for instance, announced that they are offering free delivery on orders over $10 so that you could be a “true couchpotatriot,” and that they are donating Whopper sandwiches to nurses on the frontlines.

KFC highlighted, in its latest commercial, for the $20 Fill Up, that drive-thrus are open and that you can also get your order with free delivery by Grubhub (this is valid until April 26, if you place an order via grubhub.com, the Grubhub app, or order.kfc.com). Taco Bell has released a new commercial, too, informing consumers that its drive-thrus are open and ensuring them that the restaurant chain implements all the necessary measures for making sure all the food is prepared, handled and delivered in the right conditions.