Home / Auto / IVECO Commercial: We Are Unstoppable Together 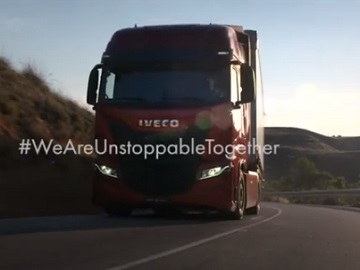 At a time when everyone is thinking about the medical workers, IVECO celebrates a category that is less talked about but still highly important: truck drivers, which are presented as “the unstoppable heroes” in a commercial created by Ogilvy.

“To you, who don’t stay home, but stay away for days. To you, who travel across cities, counties, and countries and go everywhere, from the seaside to the mountains. To you, who don’t avoid close contact and who never stop. We want to thank you. Because if you don’t stop, neither do supermarkets or pharmacies or hospitals. If you don’t stop, the world doesn’t stop. Thanks for being unstoppable,” the voiceover says on the 45-second spot, which features IVECO trucks in motion, delivering merchandise to supermarkets and pharmacies, among others, and help businesses run.

At the end of the video the hashtag #WeAreUnstoppableTogether also flashes across the screen.

The workers are shown singing along to Queen’s “Don’t Stop Me Now” at different times of the day.