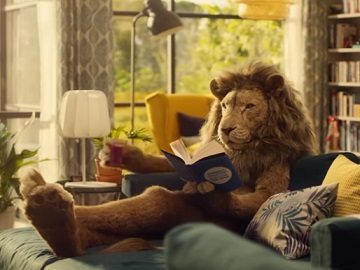 “Sometimes our habitats can feel like they’re getting the better of us, but with a little imagination you can unlock the endless possibilities that lie within your four walls,” this is the idea behind the latest installment in IKEA’s “Wonderful Everyday” campaign, which encourages people to think differently about their homes and “Conquer the Great Indoors”.

The 20-second spot, directed by Chris Barratt and Luke Taylor from US, features a lion sitting on a couch, in a living room, playing with a tennis ball, doing some stretching on the terrace, reading a book, drinking a smoothie, and welcoming a kid, who it turns out is his granddaughter. “We all get tired from our natural habitat from time to time. But remember, home is a wilderness unlike any other. It can change. Adapt. It may even surprise. It’s time to conquer the great indoors,” the voiceover says, while in the background the light-orchestral valse serenade “By the Sleepy Lagoon” by British composer Eric Coates (with an additional production by Paul Sumpter) plays.

This is not the first time the Swedish retailer uses the image of the lion man in this campaign. A previous spot highlighted that lions spend more than 18 hours a day relaxing and “waiting for the right moment” and decide it’s time for action when their minds and bodies are fully recharged.