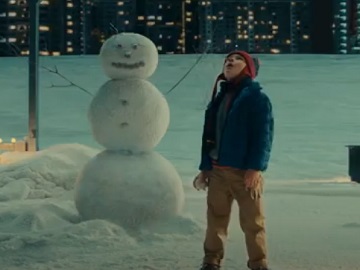 IKEA and Russian ad agency Instinct, Moscow imagined, in their Christmas 2020 commercial, what would happen if mother nature chose to return all the leftovers we carelessly throw away during the holidays, and the result is thought-provoking.

The spot, directed by Ilya Naishuller, features a boy who’s playing outside until giant items of food start raining down on the world, terrifying him. He rushes back home, avoiding on his way all kinds of scraps of food and dishes, including a tangerine (which is a homage to Indiana Jones’ boulder run), and find his mother throwing food into the garbage can. She then turns around to watch through the window and decides to save their excess food instead, using IKEA storage containers.

Set to the iconic Christmas song “Carol of the Bells”, the film is obviously campaigning against food waste and aims to encourage viewers to cook in quantities they need and save food.

“Every holiday season, it is tradition to go all out on cooking festive feasts. This occasionally means we have great gatherings with an overabundance of dishes that end up in the garbage. The idea for this spot was to provoke the viewer to question how much they really need to cook and to look into saving food via IKEA’s affordable plastic containers,” the Great Gun director Naishuller said in a statement, adding that “It’s a wonderful opportunity to be able to make something fun and enjoyable for the viewer that also has potential to make a little bit of a positive change.”