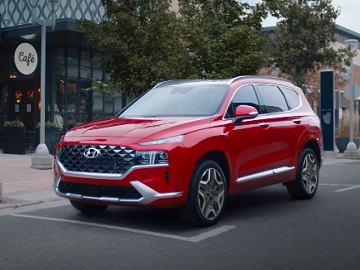 Hyundai promotes its 2021 Santa Fe in Canada with a commercial that focuses on a new safety feature: the Forward Collision-Avoidance Assist with Pedestrian, Cyclist, and Junction-Turning Detection, which helps drivers on tricky intersections and avoid forward collisions.

The spot follows a mother as she takes her little son, named Jake, on a car ride. Before leaving, she asks him if he needs to go to the toilet and he says he doesn’t need to. His dad, who’s mowing the lawn, also asks him if he went to the bathroom, and he answers he didn’t have to. On the road, though, he tells his mother that he needs to pee so she decides to change direction. A tragedy could have happened that moment but thanks to the Santa Fe Forward Collision-Avoidance Assist with Junction-Turning Detection, she manages to avoid that.

When she eventually stops the car in front of a coffee shop to use the toilet, Jake tells her it’s too late.
At the end of the ad, the voiceover says the tagline “The new Santa Fe. Thinks of everyone’s safety”.

Serving as soundtrack is “The Thieving Magpie: Overture” by London Festival Orchestra & Alfred Scholz, from the album “Classical Pops Concert: All-Time Favorites!”. The track is available for purchase on Amazon for $0.99.