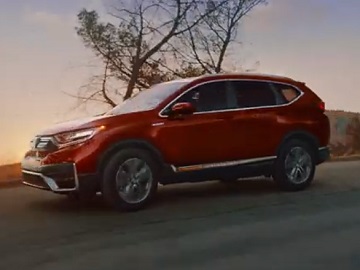 Honda’s commercial for the sporty CR-V Hybrid highlights that “the best-selling Crossover Utility Vehicle over the last decade is now available as a hybrid”.

The spot features a young couple enjoying a ride at the wheel of the CR-V Hybrid Touring, which – thanks to its Sport mode and standard All-Wheel Drive – allows them to go from the city streets, which are adorned with Christmas decorations, to the mountain roads with no problem. The video also shines a light on the wireless phone charger, compatible with Qi wireless charging standards.

The soundtrack is provided by the 2018 single Mountains by pop music group LSD (consisting of Sia, Diplo and Labrinth).

The 2020 CR-V Hybrid became Honda’s first electrified SUV in the United States. The brand’s range of electric vehicles (available in the US, as well) also consists of the Clarity plug-in hybrid, Accord Hybrid, and Insight.