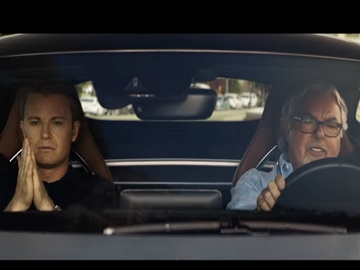 Heineken has released a new commercial featuring Nico Rosberg. This time, the Formula 1 Drivers’ World Champion shares the screen with his father, Keke.

The spot, part of the brand’s #WhenYouDriveNeverDrink campaign, follows the two champions as they compete each other in everyday life and a range of sports, including fishing, tennis and more, just to prove who’s better and see who will get to drive the car home. However, they find out that the better driver is always the one who doesn’t drink.

The soundtrack music is “Cat’s In The Cradle” by Harry Chapin.

“The better driver is the one who doesn’t drink” an onscreen line reads at the end of the film, which promotes the brand’s alcohol-free beer, Heineken 0.0.

The previous ad showed Rosberg making no comprise on and off track and refusing to drink alcohol before getting at the wheel. When one of his friends tries to convince him to have “just one beer,” he answers he’s still driving and then leaves the party and gets in a Mercedes Benz with the text “No Thanks” on the licence plate. The film, created by Publicis Italy, reminds people that “When you drive, just one beer is too many” and “When you drive never drink”.

In 2017, the legendary British racing driver Jackie Stewart, who was also a safety pioneer for the sport, fighting for important measures like mandatory seatbelt and helmet rules, fronted the campaign.

According to a research conducted by Canvas8 on behalf of Heineken, polling 5000 18-35 year old premium beer drinkers in UK, USA, Mexico, Brazil and Netherlands, 75% limit how much they drink on most nights out and 1 in 3 do this every time.

The no. 1 reason to moderate drinking on a night out is, for 7 in 10 millenials, staying in control. The “social shaming” due to their appearing drunk on social media has affected 1 in 3 millenials, according to the same research. More than 70% of the participants (71% more precisely) said they believe their life is better when they moderate.

Heineken is known for directing, each year, 10% of its media spend towards promoting responsible drinking in the attempt of making moderate drinking cool.

Previous: Quibi Coming To A Phone Near You April 6 Commercial
Next: GEICO Groom Raised by Wolves Commercial