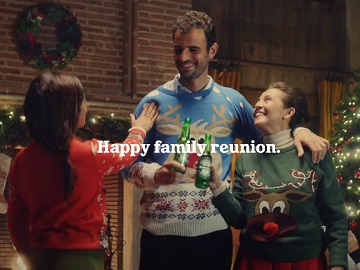 The beer brand’s Christmas commercial, created by Publicis Italia and titled “Holidays as Usual”, depicts a variety of family reunions in which the protagonists have disagreements over aspects like food, decoration and more. A young couple are annoyed by the fact that they have to take their shoes off at the entrance, a young woman remembers how perfectionist her mother is when making the final touches on the Christmas cake, a young man is treated like a child again and dressed, against his wish, with a Christmas jumper by his aunts, another young man watching a soccer game on TV finds himself forced to listen to carols when his mother grabs the remote, another young man doesn’t seem to meet his father’s expectations when putting the star on top of the Christmas tree, a young woman who went grocery shopping with her mom is not “allowed” to have chips and a young man eating cake on the sofa sees his grandma fallen asleep, the plate in her hands.

The spot, part of the global #SocialiseResponsibly platform, ends with the onscreen lines “After such a different year, fortunately one thing stayed the same. Happy family reunion!”, while the protagonists are shown cheering with Heineken.

The soundtrack music is Best Day Of My Life by Jackson & Marsman feat. Dante & Roos.