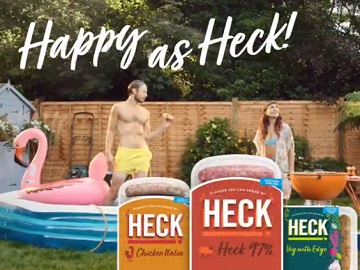 HECK!, the UK’s largest premium sausage and burger company, launched its first TV ad campaign earlier this month, and encourages consumers to have a good time at home if they are not able to go on a vacation.

The spot, which debuted on July 3rd during Channel 4’s Celebrity Gogglebox, depicts a variety of scenarios in which the protagonists apparently enjoy a holiday on an exotic island, a day at the pool, and a romantic night date. A woman is shown lounging in a hammock, a young man is shown getting out of water, and a young couple looking into each other’s eyes under the moonlight. It soon turns out they are all at home, in their own backyard, turning their staycation into a happy experience with Heck! sausages.

“Make This Summer Happy as Heck!” the voiceover says at the end of the 30-second ad, which was filmed and produced in lock down.

The campaign, for which the North Yorkshire food firm teamed up with Neverland and Harrogate’s Alchemy Media, also includes OOH, social media activity, national PR and competitions across the Summer.

Jamie Keeble co-founder of HECK! Jamie Keeble said in a press statement “The last few months have been an unprecedented time for food manufacturing and our business has changed inside and out. As a company, our focus initially was on our people and community and helping where we can. Then we looked at how we could respond to the new way of shopping and eating and we launched a new frozen range which has been incredibly popular as people are shopping less and stocking up their freezers. We now have the biggest range of fantastic tasty range of pork, chicken and vegan burgers and bangers, much loved by a very loyal audience. We’d now like to invest in the future of the business by bringing our story to a wider TV audience”.