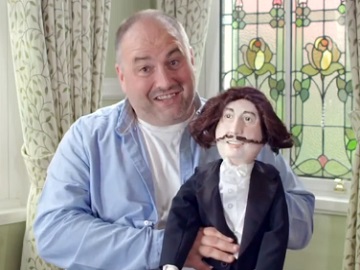 Wynne Evans, the Welsh tenor who plays Gio Compario, GoCompare’s longtime mascot, is back to the small screen in a series of new ads for the comparison website.

In one of them, he stars alongside a dummy version of Gio Compario. “So, no prizes for guessing who offers £250 free excess cover when you buy your car insurance through GoCompare,” he says. At the end of the video, the GoCompare jingle is heard, apparently from the dummy, but Evans admits that it was actually him the one who sang.

The offer is valid for UK residents and car insurance purchases only through the comparison website and excludes breakdown, windscreen and glass repair/replacement. The excess is refunded after the claim settlement. For terms and conditions, viewers are advised to visit the website.

Earlier this year, Compario was featured in several ads that re-enacted car accidents that led to real insurance claims. One of them showed him having a car accident in his attempt to avoid hitting a deer standing in the middle of the road and another one showed him as Margaret Mahoney, a woman who hit a tree fallen on the road because she didn’t have enough time to brake and had her car damaged.

Compario, who became GoCompare’s mascot in 2009 and has appeared, since then, in numerous ads, has become one of the longest-running characters in British advertising.