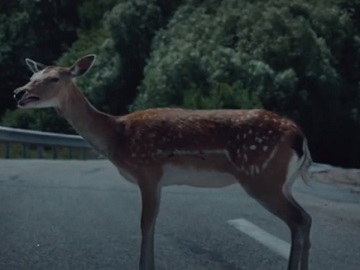 Gio Compario is back to the small screen in a new advert for GoCompare. After the latest spot, which saw the company’s longtime spokesman re-enacting a car accident that led to a real insurance claim, this time the opera singer is featured in a reconstruction of another car accident that took place because the driver tried to avoid hitting a deer standing in the middle of the road.

“We never know what’s around the corner, which is why GoCompare now gives £250 free excess cover for when the unexpected happens,” Wynne Evans, the Welsh tenor who plays Compario, says at the end of the advert.

The offer is valid for qualifying customers when they buy or switch insurance through the comparison website.

The previous spot, titled “Tree” and created by Droga5 London, featured Compario as Margaret Mahoney, a woman who hit a tree fallen on the road because she didn’t have enough time to brake and had her car damaged.

Compario, who became GoCompare’s mascot in 2009 and has appeared, since then, in numerous ads, has become one of the longest-running characters in British advertising.