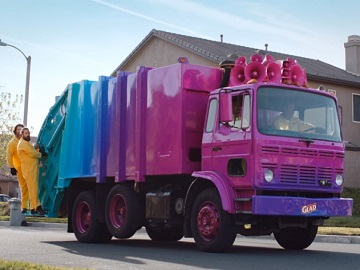 “Trash day doesn’t have to be total garbage,” this is the idea behind the latest Glad commercial, which promotes the new Glad ForceFlex Plus, described as the brand’s “happiest bag yet”.

The 60-second spot features a woman taking out ger trash and ending up with some of it on the ground due to the garbage bags, which are not very resistant. As she’s starting to collect it, a colorful Glad garbage truck, featuring hues of purple and blue, appears on the street, with four workers saving the day. While one of them rushes with ForceFlex Plus bags to collect the woman’s trash, others are blowing soap bubbles and pink smoke, creating a festive atmosphere. Eventually, as they leave, they are shown waving to the residents, who were left speechless by their “performance”.