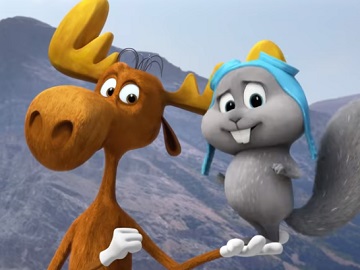 While on a hike, the gecko comes across Rocky and Bullwinkle who are debating who the Rocky Mountains are named after, in the latest GEICO ad.

The company’s cute mascot, voiced by Jake Wood, is near the Rocky Mountains and says that GEICO’s been helping people save money for over 75 years. “They’ve really stood the test of time, much like these majestic Rocky Mountains,” he adds, looking at the mountains. As he tries to share his opinion on who they are named after, Rocky the Flying Squirrel and Bullwinkle show up, expressing their opinions, as well. After “Mr. Winkle” says he believes the Rocky Mountains are named after their first president, George Rockington, the Gecko – still confused about what’s happening in front of him – declares that “That doesn’t even make any sense…”.

The commercial ends with the voiceover adding the tagline “GEICO. Over 75 years of savings and service”.

In previous ads, the Gecko finds himself in a game of Tetris and plays Rocket League for the first time.

This year, GEICO promoted its motorcycle and boat coverage, as well as its Giveback program, which implies giving auto, motorcycle, and RV policyholders a 15% credit on their next 6-month or 12-month policy term. The insurance company also launched, in the midst of the coronavirus crisis, GEICO Faces series, which includes short videos featuring GEICO associates across the country, sharing their experiences and thoughts related to working from home, coping with what the pandemic has brought us, and more.