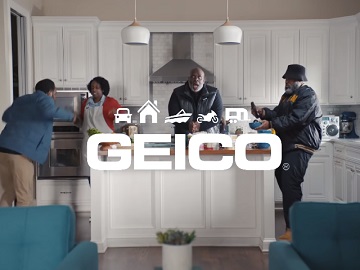 GEICO has teamed up with Tag Team for a new commercial.

The spot, part of the company’s “What Are You Waiting For?”, features a woman named Tasha (Nicci Carr) in her kitchen, preparing dessert for her guests. She learns that GEICO could save her hundreds on car insurance and a whole lot more and soon finds herself with the Tag Team members helping her out with the ice cream. Equipped with ice cream scoops, Cecil Glenn and Steve Gibson are putting ice cream in bowls while singing a new version of their 1993 single “Whoomp! (There It Is)”. However, the lyrics are changed, adapted for the context. “French vanilla, rocky road, chocolate, peanut butter, cookie dough. Scoop, there it is”, the duo are singing. They also perform the famous “Shaka-laka-shaka-laka-shaka-laka” part, making Tasha and her husband relive the ’90s spirit and bust some dance moves. Their teenage daughter, though, who witnesses the “events” for a few seconds, decides to “escape” the performance.

At the end of the commercial, the voiceover urges viewers to switch today and see all the ways they could save.