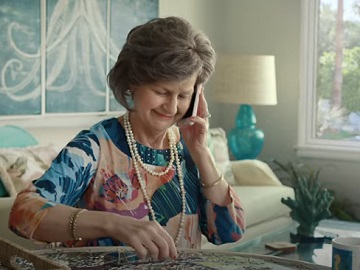 GEICO has released a series of new ads featuring Spy Mom and her son, to highlight that you can get an extra 15% credit on car and motorcycle insurance if you switch to GEICO by October 7.

In one of them, Spy Mom (played by Cindy Drummond) makes an important call to her son (played by Marsh Mokhtari) to share about their new-found viking lineage. While the young man is caught in the middle of a chase, on the rooftop of a building, with bad guys just by his side, she calls him to let him know about the new GEICO savings, namely that he’ll get an extra 15% on top of what GEICO could already save him. The Spy Mom, who’s at home, solving a puzzle, is obviously in the mood of chatting so she continues the conversation with her son by telling him that his father has been researching their genealogy and has discovered that they are vikings.

The commercial, which also stars Micah Fitzgerald, Lateef Crowder, Jay Hieron and John Koyama as the bad guys, ends with the voiceover saying “There’s never been a better time to save with GEICO” and urging viewers to switch by October 7 for an extra 15% on car and motorcycle insurance.

This offer is part of the insurance company’s Giveback program, which implies giving auto, motorcycle, and RV policyholders a 15% credit on their next 6-month or 12-month policy term. GEICO has also been promoting its boat, RV and motorcycle insurance this year.