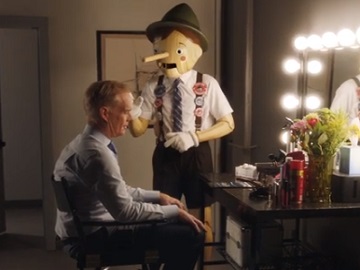 Pinocchio sneaks into Joe Buck’s dressing room to help him get ready for the big game in one of the latest GEICO ads, part of the Sequels campaign.

The wooden character tries to convince Joe to vote for him as his favorite GEICO Sequel star, but – in his attempt to do that – tells some lies. He tells Joe he watched every game he has called, he then offers to do Joe’s hair, saying he went to Beauty School in Italia. Asked if he has ever thought of being more real, Pinocchio manages to wreak havoc by pushing to the floor a vase with his now much longer nose.

The commercial ends with the voiceover urging viewers to cast their favorite GEICO Sequel star on the company’s website.

In a previous commercial, the wooden puppet (voiced by Benjamin Rowe) is shown going on a date which it turns out he scored using an online dating app. His date, played by Hillary Matthews, is shocked to learn that the man she was waiting for is actually Pinocchio and leaves.

The GEICO Sequels campaign includes several other spots that show the characters – Pinocchio, raccoons and more – doing all kinds of things. The raccoons, for instance, hijack a garbage truck and start a food truck business called Chez Dumpster.