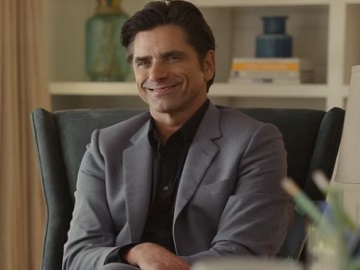 GEICO has enlisted John Stamos to star in its latest commercial.

The Full House actor shows off his knitting skills and shares a “secret” about his hair.

The spot opens with Jean, a woman played by Carmella Riley, who’s informed by the voiceover (Andrew Anthony) that GEICO is now offering an extra 15% on car and motorcycle insurance, which is on top of the 15% she could normally save on car and motorcycle insurance. Asked if she’s waiting for John Stamos to knit her a scarf (presuming this is what sops her from switching to GEICO), Jean doesn’t get to reply because she immediately receives a knit scarf from Stamos. Taking a look at it, she praises the stitch work, describing it as “impeccable,” which makes Stamos answer that it’s not a big deal, just “a double fleck pattern with a reverse garter stitch.” When the woman asks him if his hair is this soft, he reveals that it’s even softer.

At the end of the commercial, the voiceover highlights that you can get an extra 15% on car and motorcycle insurance if you switch to GEICO by October 7.

Stamos is only the latest celebrity in a long list to appear in a GEICO ad. His Full House co-star Dave Coulier has also featured in a series of spots for the insurance company. In one of them, he is saved from the couch by a couple who are searching for the remote control. In another one, called “Sit-Down Comedy”, he sets the record for most dad jokes told in a row and shares some of the things we all should probably cut out of our lives in the “Life Lessons” video. “Wearing socks with sandals”, “Wearing gym clothes but never really going to the gym”, “Being the first to like your own post”, “Holding out to your ’90s hairdo hoping it will come back into style” are among the things to be cut out, according to Coulier.