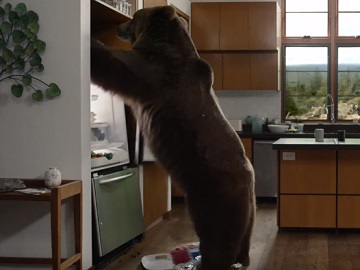 GEICO advertises its homeowners’ insurance in a new commercial.

The spot features a married couple who wanted different things for their new home. He wanted a man cave and she wanted to be close to nature, so they found a middle way: they set up huge TVs for watching sports as he wished, and rocks on the wall to make her feel closer to nature. It soon turns out they also found an unlikely roommate: a bear. The animal is shown stepping out of his “room” and going to the fridge, which he damages while trying to grab something.

The man admits there was actually something they could both agree on: getting GEICO to help with homeowners insurance. His wife adds that it was really easy and they saved thus a bunch of money.

Eventually, she praises the bear for having managed to get something from the fridge, which he disassembled. “You are such a smart boy,” she also tells the furry friend, who was thirsty and looking for a drink.

The commercial ends with the voiceover urging viewers to call GEICO and see how easy saving on homeowners and condo insurance can be.