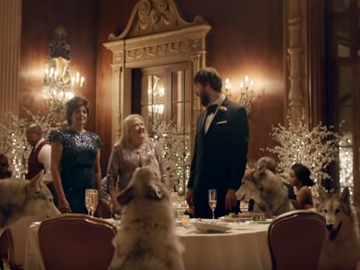 Wedding guests are surprised to find out that the groom’s family is actually just a pack of wolves in the latest GEICO ad, titled “Raised by Wolves”.

The 30-second spot is set in a restaurant and opens with two maids of honor (Shondalia White and Ansley Gordon) having a conversation at their table, near the bride (played by Aynsley Bubbico). “I can’t believe it,” says one of them looking into a specific direction. “That Chad really was raised by wolves?” another one asks looking in the same direction. At this point, the ad features Chad (Dan Lippert), the groom, surrounded by several wolves, including his “mother,” at which he points to present her to an old lady. Back to the maids of honor, the first one takes out her phone and clarifies she can’t believe how easy it was to save hundreds of dollars on her car insurance with GEICO.

The next shot features again the groom’s table, where the wolves have wreaked havoc and the old lady telling the groom that she is glad to have met his beautiful family. Soon, she’s also realizing that they’d better be sitting down.

“Believe it! GEICO could save you fifteen percent or more on car insurance,” the voiceover says at the end of the commercial.