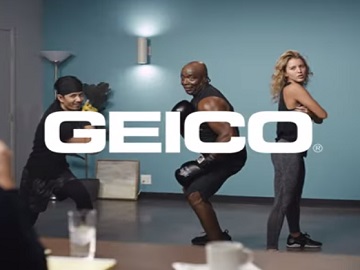 The spot features Blanks auditioning to get a role in a TV spot for GEICO Claims, but apparently he is too “intense”. During take 1, he says “Hey, guys, my windshield just got broken, I feel like I need to blow off some steam. Let’s go,” and starts kicking the air, counting the times he does that. However, casting director Evan tries to stop him, telling him there’s no need to be stressed because GEICO makes it easy to file a claim online, on the app, or over the phone. “Yeah, but what if I never hear back? That’s gonna make me want to go jab… jab!” Blanks says in response. After learning from casting director Kari that “your GEICO Claims team is always there for you,” he says this makes him want to celebrate with some fireworks and starts showing off his moves again.

“GEICO. Great service without all the drama,” the voiceover says at the end of the commercial, which uses the 1990 song “The Power” by German Eurodance group Snap! and also features Brian Zo and Angeline Appel as Blank’s fitness assistants, Michole White and Chris Aquilino as casting directors Kari and Evan, and Michael Strassner as camera operator Kevin.

A previous commercial for the insurance company’s “fast & convenient” Claims service featured a woman who gave her fitness tracker to her dog and she sat on the bench instead to highlight that filing and managing her claim on the GEICO app is not just easy, “it’s giving your dog your fitness tracker easy”.

GEICO provides, on its website, guides on what to do after various types of incidents including accident, glass damage, theft, fire damage, and catastrophe. For claims assistance, customers can also visit GEICO branches or call at 1-800-841-3000.

Blanks is only the latest celebrity in a long list to appear in a GEICO ad. Among other famous actors starring in commercials for the insurer are John Stamos, who shows off his knitting skills and shares a “secret” about his hair, his Full House co-star Dave Coulier, who is saved from the couch by a couple who are searching for the remote control, and many more.