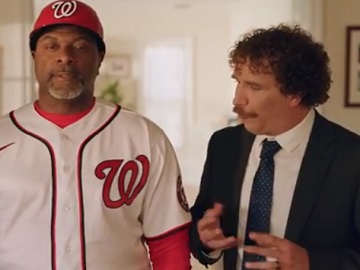 A woman hires a third base coach to help her husband remember where he’s left things around the house in the latest GEICO ad, which also celebrates the company’s status of official partner of Major League Baseball.

The spot opens with the woman (played by Lauren Howard Heyes), saying that GEICO made it easy for her to bundle her home and auto insurance that she thought about a way to make it easy for her husband to find his things in the house. This is how she came up with the idea of hiring an MLB third base coach. The next shot features her husband (played by James Heaney), trying to find his car keys with help from his coach (played by Garry Guerrier), who’s giving him instructions through hand signs. After finding them, he realizes he needs to find also his cellphone.

Seeing that the coach is leaving and willing to get some more help from him, he shouts that this is a top priority.

The commercial ends with the wife mentioning that he is “a sweet man” and with the voiceover saying that “it’s easy to bundle and save with GEICO.