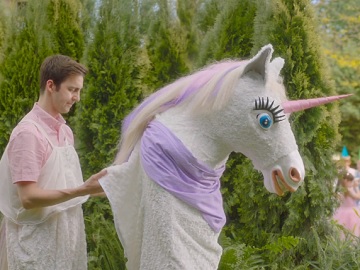 Gain advertises, in one of its latest commercials, the Gain Flings 3-in-1 and the Scent Blast range.

The spot features Fred, a father who would do anything for his daughter, especially on her birthday. He would even get into a huge unicorn costume as the back half, even if this idea makes him feel reluctant a little bit. However, his mood changes when he smells the shirt of the man in the front half. The scent of Gain Scent Blast puts him in a good mood, so he starts to prance and dance across the yard, to the excitement of the birthday girl and her party guests.

“That’s the scent that puts the giddy in giddy up,” the voiceover says toward the end of the video, adding “irresistible scent of Gain” and urging viewers to try Gain Scent Blast range (including detergent, softener and scent beads) for scent with even more giddy-up.

In another recent ad, the detergent brand promotes its new Gain Ultra Flings Laundry Detergent Pacs, which are now available with two times the Oxi Boost and Febreze. The spot features a couple who use these pacs for their ultra-big, ultra-stinky loads, due to their dog, Michelangelo, who jumps and rolls on the bed while they are gone.