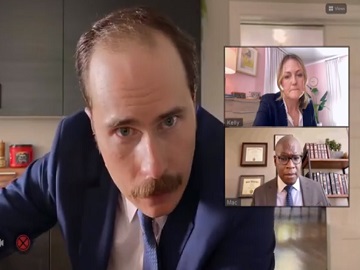 Folgers has released a new ad, tackling the work-from-home reality, which sometimes includes videoconference awkwardness due to the lack of pants.

The spot features a man who’s wearing his ironed shirt during a videocall with his team, but not also his pants. The female voiceover draws his attention on that in a singing voice and advises him to pour some coffee in his cup and aim the camera up high.

At the end of the video the Folgers tagline “The Best Part Of Wakin’ Up is Folgers in your cup” is performed.

Last year, in December, the coffee brand faced backlash after its “Visit” commercial, which featured a woman walking in on her father in law taking a shower. However, that was not the first time a Folgers commercial created controversy. In 2009, the “Brother & Sister Home For Christmas” was also criticized for the sexual tension between the two siblings.