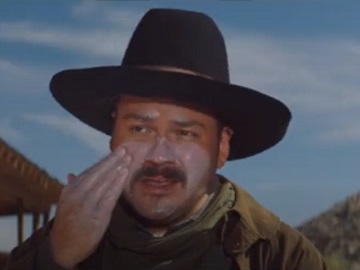 One of the spots, set in the Wild West, opens with the drama and tension ahead a duel between two cowboys which is suddenly interrupted by one of them, who slathers sunscreen all over his face because the sun is “so bad”. His opponent agrees and they both decide to postpone their duel to sunset. “It will be so purple out, until the blood runs through the street,” the cowboy says.

“It ain’t just a bourbon, it’s a damn fistful,” the voiceover says at the end of the commercial, which urges viewers to “don’t be a dams fool” and “measure and enjoy responsibly”.

In another spot, a cowboy compares the bourbon’s smoothness to the silk loungewear he has taken to wearing and in another spot, featuring a bar scene, the same cowboy doesn’t manage to catch a glass of Fistful of Bourbon.