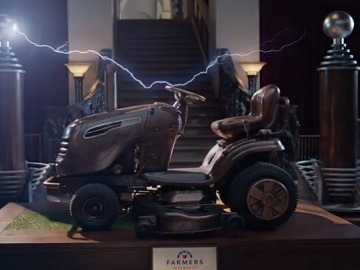 Farmers has released a new ad, titled “Am I in a Farmers Commercial?”, which depicts an event that took place on August 8, 2010, and that led to another claim covered by the insurance company.

“Uhm, Mitchel, were you planning on mowing the lawn today?” the teenager is asked by his mother who, hearing his negative answer and then the Farmers jingle, concludes they are in a Farmers commercial. “Stuff’s about to get real,” the young man says who then rejoices when a lightning bolt strikes his riding mower.

The commercial ends with Prof. Burke – played by Academy Award-winning actor J.K Simmons – saying “Saved by the Bolt!” to a customer who’s standing next to him in the Hall of Claims and is watching a “flash-fried” mini version of a mower.