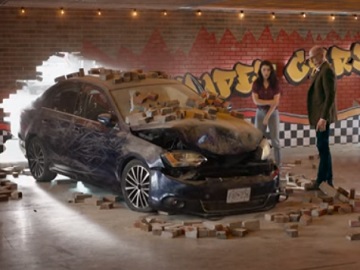 The spot aims to highlight that, using a Farmers Policy Perk, you can turn a car accident into an “acci-didn’t” and that, if you choose Accident Forgiveness, your rates won’t go up just because of an accident. When a young woman tells Prof. Burke she doesn’t know what happened (while standing near her crashed car), the latter says – to her surprise – that nothing happened. She points out that it looks like something happened, but she is then reminded that she’s been with Farmers for three years and she had zero auto claims, which helped her earn her Farmers Perk Accident Forgiveness and now, “instead of being something, it’s nothing”.

The Accident Forgiveness is available with Farmers Branded Smart Plan Automobile Policies but is not available in CA, HI, NY and SC. Optional coverage can be purchased at additional cost.

Simmons has starred in numerous ads part of the company’s long running “Hall of Claims” campaign, which illustrated a variety of “real-life bizarre insurance claims”, from household accidents to unexpected run-ins with animals to car crashes, that the insurance company dealt with.