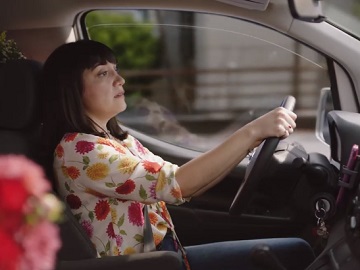 Farmers continues its “Am I in a Farmers Commercial?” series with a new installment, featuring a florist, whose routine drive went off the rails thanks to a bee.

The spot re-enacts an event that took place on June 18, 2018, and led to another claim covered by the insurance company. The florist was driving and talking to her mother on the phone when she spotted a bee on her shoulder. Her attempt to chase it away resulted in an incident with her van.

The commercial ends with Prof. Burke – played by Academy Award-winning actor J.K Simmons – saying “The bees are just part of the biz but we covered it” to a customer who’s standing next to him in the Hall of Claims and is watching a statue with a crown of flowers on its head and a bee flying around.

“At Farmers Insurance, we know a thing or two because we’ve seen a thing or two, so get a quote at Farmers.com,” Prof. Burke adds.

Launched back in 2016, the “Hall of Claims” campaign has featured, so far, many other “real-life bizarre insurance claims”, from household accidents to unexpected run-ins with animals to car crashes, that the insurance company dealt with. They are all available to browse through on the interactive website called “Hall of Claims”, created based on real insurance claims compiled by Farmers’ network of agents and its claims professionals.

Previous: E*TRADE Why Did She Commercial
Next: eBay Trolls Advert