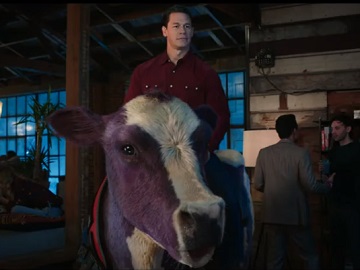 One of the spots, titled “Therapy Party,” features Cena showing up on a purple cow at a party to save the day/night for a young man who says there was nothing he could do in order to get the credit card he had wanted. At this point, Cena, who’s now standing in front of him, tells him he’s wrong and asks him if he has Experian. He then pronounces the word “cow” and the cow moos, which leads to the guy using the Experian Boost to boost his credit score.

“Boost your credit score instantly, free, with Experian,” the voiceover says at the end of the commercial, urging viewers to download the app.

This is not the first commercial featuring Cena riding a purple cow. Earlier this year, in February, he appeared in a spot leading a stampede of purple cows to save the day for a downtrodden man stranded with his broken down truck in the desert and a sign reading “credit denied”.