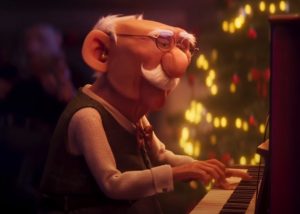 Vienna-based banking group Erste has released its Christmas 2020 commercial, reminding people that, “Whether you’re young or old: what counts at Christmas is being there for each other”.

The 2-minute animated film, titled “Edgar’s Christmas,” tells the story of an old man named Edgar living in a day care, who refuses to wear his hearing aid and socialize with the other seniors. The young nurse taking care of him, who knows his passion for playing the piano, accidentally discovers, in his room, a play for his mother since he was a child along with a photo of the two, and comes up with an idea on Christmas Eve. She convinces him, with no words, to play the piano again and relive the moments he wants lived as a child playing next to his mom at Christmas time.

The commercial ends with the hashtags #believeinlove, #believeinchristmas and #believeinyourself.

Erste Group launched its first international online campaign for Christmas in 2018, with a touching animated spot about a little hedgehog, which told a story about the power of love, of believing in yourself and in the good of others. In 2019, Erste’s Christmas ad featured a bumblebee named Hanna Bumblebee who pursued her dream of flying in a world in which bumblebees believed they cannot fly.