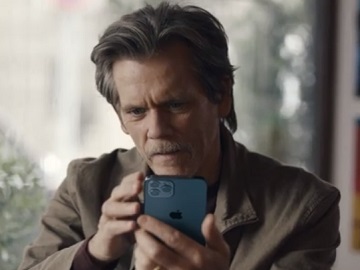 EE, the UK’s best network for seven years running according to RootMetrics, has released a new ad to promote the iPhone 12 Pro with 5G, which is now available for purchase.

The spot features Kevin Bacon sitting at a table in a coffee shop on a rainy day and “talking” to his new iPhone 12 Pro (his internal monologue is actually heard in voiceover). “I can’t believe you’re finally mine. The iPhone 12 Pro on EE, the number 1 5G network. Those edges. That camera,” he says, caressing the smartphone (which comes with a full plan for iPhone) and adding that “there is nothing left to want” and nothing he wants more. In the meantime, Doug appears behind Bacon, outside, in the rain, staring at the new iPhone.

At the end of the advert, the actor urges viewers to get the new Apple’s smartphone on EE and “be the envy of everyone”.

The iPhone 12 Pro, features the powerful A14 Bionic, all-new design with Ceramic Shield, pro camera system, LiDAR Scanner, and the biggest Super Retina XDR display ever on an iPhone.

Earlier this year, in August, Bacon and Doug co-starred in another advert, which introduced the concept of “network envy”. Doug, who is sharing a park bench with Kevin Bacon, sees Bacon’s his new phone, which was bought on EE, the network that has “just won number one network for 5G and number one network seven years in a row”, and this makes him gripped by envy (because his network is second best to EE).

This campaign, created by agency Saatchy & Saatchy London, debuted on August 10 with a nationwide OOH and runs across TV, out of home (OOH) and video on demand (VOD), with edits and content developed specifically for a range of digital and social channels.