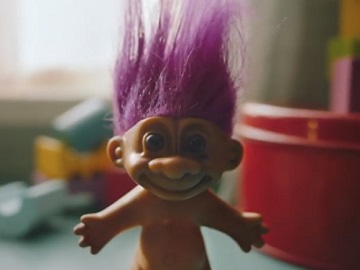 eBay UK shines a light on the importance of selling the stuff we don’t use anymore in a hilarious new ad.

The spot takes viewers on a journey through a kid’s room, which is filled with troll dolls and many other troll-themed items. This wouldn’t be a problem if the room belonged to a child, but as the voiceover points out “it’s all fun and games until that child turns 34 years and still lives with his parents and his room is still full of troll dolls.

“It was just a small gift from mummy and daddy. One however that would spark a bit of an obsession. It started out innocent enough as these things always do but quickly lit the fuse to something bigger. Mum and dad encouraged other activities but at last had to sell things almost as fast as they bought them. Friends and family thought it was cute. ‘It’s just a bit of fun,’ they said. ‘It’s just a phase,’ they said. Well, it’s all fun and games until your child is 34, still lives at home, and absolutely nothing has changed,” the voiceover says, adding that “these things should really come with a warning label” and the eBay tagline, “Buy. Sell. eBay”.

On eBay, troll fans can find a keyring/pencil topper in the shape of a green lucky troll doll just like the one in the opening of the advert and buy it for £1.99. There also are for sale collections of vintage trolls as well as new 12-inch soft plush troll toys from the official Trolls World Tour including Poppy, Barb, Tiny Diamond, King Trollex, and more.