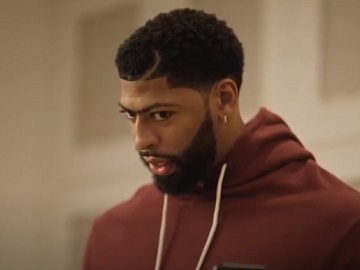 eBay has released a hilarious new commercial to promote its Santa Sneaker Drop.

The spot features Anthony Davis making cookies in his kitchen and listening to a voice message (the latest in a long series, apparently) left by Santa. The latter says thanks to the All-NBA forward for having driven his sleigh the night before and asks him to explain the reason why he is getting calls about sneakers falling from the sky. When the phone rings and the caller is Santa, Davis puts it on the tray and places the tray into the oven.

At the end of the video, viewers are directed to visit the dedicated website for the event, which will be taking place between December 22nd and December 24th.

eBay informed people that now more “than 500 pairs of kicks need a home for the holidays or Anthony’s gonna earn a spot on the big guy’s naughty list” and encourages them to check out the website on December 22nd and make their Christmas a little bit brighter.

Earlier this month, Anthony Davis agreed to five-year, $190 million maximum contract to stay with Los Angeles Lakers. The 27-year-old player is the co-star of the Lakers with LeBron James.