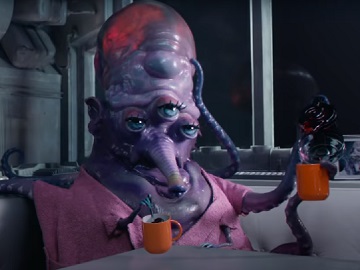 Dunkin’ has released a new ad to promote its Medium Roast Original Blend and K-Cup Packs.

The 15-second spot is set on a spaceship and shows a couple of aliens meeting in the kitchen. While the lady is at the table, struggling against the gravity to pour herself some Dunkin’, her husband shows up, wearing a King Crimson T-shirt. “Ok, you drank all the milk,” he concludes after taking a look in the fridge and showing off his briefs featuring a pink hearts motif.

“Don’t feel like wearing pants? Enjoy the great taste of Dunkin’ at home,” the voiceover says at the end of the commercial.

Some of the viewers, who are also fans of the JoJo video games, noticed the T-shirt and couldn’t help notice, as well, the reference to the character’s notable attack, the Donut Punch (he punches a donut into your weak chest). King Crimson is also the name of an English progressive rock band formed in London in 1968.

Previous: Muscle Milk Own Your Strength Commercial – Feat. Tua Tagovailoa
Next: Eargo Did You Bring Any Condoms Commercial