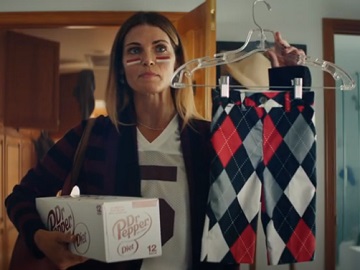 Dr Pepper continues the third season of Fansville, the drama series featuring parody storytelling from a town of college football fanatics, with a new installment, which tackles a new superstition.

The spot, titled “Lucky Pants,” features a man looking for his lucky pants before going to a game with his wife.

Even though she tells him to go without them so that they wouldn’t be late, assuring him that she’s got the Dr Pepper, the fan keep looking for them, which makes his wife admit that there was a problem at the cleaners and they shrunk his lucky pants. It turns out the man was so superstitious that he couldn’t go to the game without his lucky pants. However, after a showoff in front of the house, where he poses for his wife and son, telling them they still fit and feel like a glove, the town’s sheriff (Brian Bosworth) appears.

A final onscreen line informs that Dr Pepper is “The Official Drink of Fansville”.

The previous episode featured one fan at a backyard BBQ, who voices his overconfidence in the star player of his favorite team and, after the latter misses the shot, is accused of having jinxed and gets arrested.

The third season of Fansville is part of the brand’s sponsorship of the College Football Playoff and Presenting Sponsorship of the National Championship Trophy, which goes through 2026. Dr Pepper has also doubled its tuition giveaway program, taking it to $2 million, the most they have ever given away in the program’s history.

Additionally, Dr Pepper will donate $1 to Scholarship America for every Dr Pepper purchase where a consumer texts a picture of their receipt to TUITION (21688).