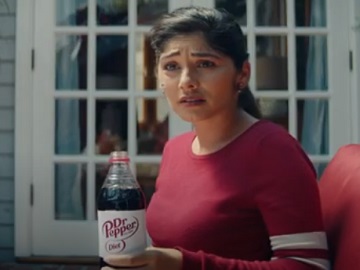 While enjoying an ice-cold Dr Pepper at a backyard BBQ, one fan learns that some things are best left unspoken in the latest episode of Fansville, Dr Pepper’s episodic drama featuring parody storytelling from a town of college football fanatics.

When the star player is about to kick a field goal and score the winning point, the young man in front of the TV (played by Nick Ballard), with his face painted in the colors of his favorite team, says there’s no way the kicker can miss it because he’s “automatic”. Unfortunately, he does miss the shot, which causes the team to lose the game.

The fan who dared to verbally express his confidence soon finds himself accused by the other fans at the BBQ, in particular a girl in waitress outfit (played by Natasha Marc) of having jinxed and in no time the town’s sherrif (Brian Boswroth) arrives and arrests him.

A final onscreen line informs that Dr Pepper is “The Official Drink of Fansville”.

This is the third season of Fansville and is part of the brand’s sponsorship of the College Football Playoff and Presenting Sponsorship of the National Championship Trophy, which goes through 2026. Dr Pepper has also doubled its tuition giveaway program, taking it to $2 million, the most they have ever given away in the program’s history.

Additionally, Dr Pepper will donate $1 to Scholarship America for every Dr Pepper purchase where a consumer texts a picture of their receipt to TUITION (21688).