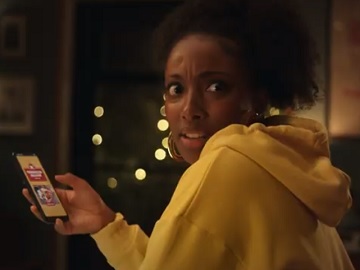 Domino’s Pizza has released a hilarious new ad to promote its Pizza Tracker.

The spot, created by VCCP, London and titled “Concrete Claire,” features a group of friends trying to decide where to order their takeaway from. When one of them suggests they go for something called “Madagascan Halloumi Pop-Up”, a version of her enters the room, shocking everyone with her appearance. The young woman, which it turns out is from the future, covered in dried concrete from chest down, shouts to the girls to not order that dish because a series of events will take place leading to her ending up like that.

Eventually, they decide to have something from Domino’s Pizza, which allows them to track their order from store to door thanks to Dom, the Pizza Tracker.

With its new “We Got This” campaign, the pizza chain aims to remind people in the UK & Northern Ireland that Domino’s is the most reliable option for everybody, for every occasion, thanks to its unrivaled end-to-end delivery service.

A Domino’s spokesperson said in a press statement that the company’s pizza tracker is “a live system based on real-time information from our kitchens. With over half our drivers using GPS, many customers can watch their pizza progress from store to front door. Each stage of the order process is manually ticked off by a store team member, right through from preparation to leaving for delivery”.