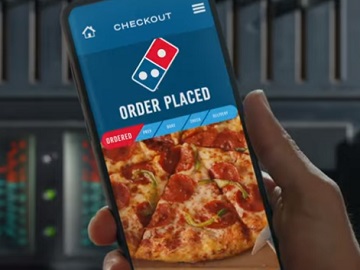 Domino’s Pizza advertises its Domino’s Tracker in a new spot, titled “Delivery Business,” aiming to highlight that this technology feature, which has GPS, helps you make sure you are not interrupted, whatever you’re doing.

The ad shows a young man in his dining room, who, after ordering a pizza on Domino’s Pizza app, starts dancing around the house in his underwear to the rhythms of Bob Seger & The Silver Bullet Band’s single “Old Time Rock And Roll (Remastered)”. As he shows off his dance moves, lipsinging at the same time, like a rock&roll artist, he gets a notification informing him that his pizza order is 2 minutes away, which makes him grab a pair of pants before the arrival of the delivery guy.

“Now Domino’s Tracker has GPS with delivery alerts so we don’t get you before you’re ready,” the voiceover says at the end of the ad, urging viewers to try it next time they get any 2 medium 2-topping pizzas, at $5.99 each.

This is not the first time the pizza chain promotes its tracking feature. A previous commercial features actor Joe Keery interrupting the date with his girlfriend when he gets a notification on the smartwatch that his Domino’s Pizza order is about to be delivered. With the countdown on, he embarks on a mission, inspired by the 1986 classic “Ferris Bueller’s Day Off” racing home scene, to get home as soon as possible, which implies running across his neighbors’ frontyards and backyards, jumping over fences, avoiding all kind of obstacles, such as cars parked on the sidewalk, and girls sunbathing (in front of whom he brags about him having ordered from Domino’s Pizza). He’s also running in the street for a while, alongside a red Audi, with Mmom written on the license plate, driven by Alan Ruck (the actor who played Bueller’s best friend, Cameron Frye, in the iconic film) and jumps on a trampoline before, eventually, getting in front of his main door, just in time to take the pizza over from the delivery guy.

Domino’s Tracker, launched in 2008, follows a customer’s pizza order from the moment it’s placed until it gets to the destination.