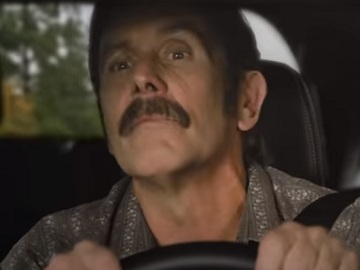 Dodge has released a new commercial to remind people the Dodge family motto and to celebrate the brand’s 1st place ranking in the recent J.D. Power initial quality study.

The spot, created in partnership with GSD&M, features the actor Gary Cole reprising his role as Reese Bobby from the 2006 film Talladega Nights: The Ballad of Ricky Bobby and the Challenger, Charger, and Durango models from Dodge. Cole, who is at the wheel of a 2021 Dodge Durango SRT Hellcat, asks his young son Ricky, who yells that he wants to go fast, to pull over. He also calls out to Ricky’s best friend, Cal Naughton Jr., who says, from the wheel of a 2020 Dodge Challenger SRT Super Stock, that he had Mountain Dew for breakfast. Reese, outrun by his young son, reminds him the family motto: “if you ain’t first, you’re last”.

The song used in the ad is AC/DC’s 2020 single Shot in the Dark, from their seventeenth studio album, “Power Up”.

“In our 60-second film, we needed to stay 100% true to the spirit of the original film, while simultaneously communicating the Dodge brand’s record of ‘firsts’ as ranked by our owners,” Olivier Francois, Chief Marketing Officer, said in a press statement, mentioning that they had the original movie’s cinematographer, Oliver Wood, involved with this project.