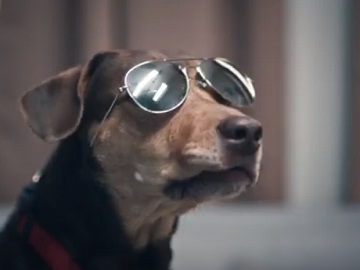 The spot features a woman who plays a detective in her apartment, where she has even created a crime scene and a board with clues. When she tells her partner, the dog, that she doesn’t like his alibi, she hears “Book him” in response (and a bark), which makes her advise him to take it easy.

“Never miss a detail again. Be a detective anytime. With the world’s most powerful DVR from DISH” onscreen lines read at the end of the commercial.

Other spots, which focus on the DVR’s features, such as 500 hours of High Definition storage, the possibility for users to stream over 80,000 movies and shows on-demand including your favorite obsession, feature a home renovation obsessed couple, who use a small chainsaw to cut a baguette, a cooking show obsessed woman, who cooks with her favorite chefs in real time and doesn’t allow her kid to taste, fearing that they’re not going to have anything left, and more.