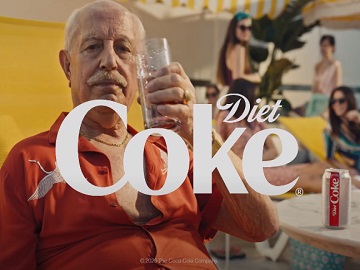 Diet Coke urges you to listen to your elders who drink Diet Coke because they know the secret to making it through this life.

The spot features an old man enjoying a bright summer day in a resort, where he’s wearing the clothes he likes and is treating himself with a Diet Coke. It also turns out that it’s his birthday as a staff member brings him a birthday cake with candles to blow.

“You know, some people say ‘Only old people drink Diet Coke’. All right, listen, old people know what’s up. They started the whole resort wear trend. But they proudly wear to breakfast, lunch and dinner, which by the way starts promptly at 4PM, completely outsmarting any need for a reservation. Maybe they drink Diet Coke because it tastes good. Or maybe they do it because their secret to making it through this life is drinking and doing whatever they want. So listen to your elders – drink up,” the voiceover says on the 30-second ad.

Earlier this year, the brand promoted its beverage in a similar commercial, which urged consumers to drink what their mothers gave them. Created by Anomaly Los Angeles and titled “Drink What Your Mama Gave You,” the spot is an ode to mothers, who did everything they did with a Diet Coke in their hand. The voiceover talks about moms’ ability to send shock waves to the neighborhood without saying a word and to make a handmade costume the night before a school play that you forgot to tell her about, not to make you happy, but because she had a reputation to uphold.

The narrator also says that mom invented ride share, called it carpool and did it for free, that she didn’t need dating app, and that she can also win any argument in four words (these are “Because I said so”). “Everything you’re trying to do, she’s already done, did it better, and she did it with a Diet Coke in her hand. So drink what your mama gave you,” the voiceover adds at the end of the commercial.