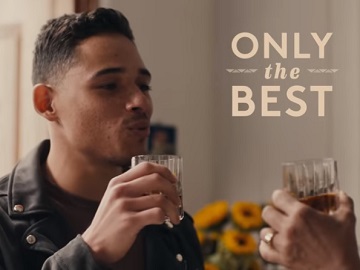 Canadian whisky brand Crown Royal aims to highlight that wealth is not about what you have, but about the people in your life, in its latest commercial.

The 30-second spot, dubbed “The Guy Who’s Got it All,” features a young man (played by Anthony Ramos) who is presented as “the guy who’s got it all” because he lives in a neighborhood where he has a sense of community and is able to pay his mother, Mildred, a visit and enjoy a glass of Crown Royal with her. Moreover, at the end of the day, he gets to meet up with his friends and have another drink. His “journey” begins after he gets out of a liquor store. Along the way, he helps a woman with a hanging plant, greets two men sitting on the stairs, in front of a flat, and, eventually, arrives at his mom’s house, where he takes out the bottle of Crown Royal he had bought and toasts to “the greatest mom in the world”.

The commercial, scored by Perk Badger’s “Do Your Stuff”, ends with the tagline “Live generously and life will treat you royally” flashing across the screen.

The commercial was met with negative reviews, many viewers criticizing the brand for the fact that it showed a man day drinking with his mother.