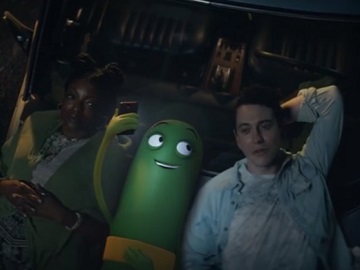 Cricket Wireless has brought its cute mascots back to the screens to announce that Cricket has nationwide 5G.

One of the spots features Rose gazing at the stars, from a hill top, with two friends. “Did you know that every second the universe expands by millions of miles in every direction?” the guys asks her and her friend. But Rose has another fun fact to share, namely that Cricket has 5G nationwide.

The commercial ends with the onscreen line “Surprising but true Cricket has nationwide 5G” alongside a Samsung Galaxy S20+ 5G.

Viewers are also informed that compatible plan and device are required for 5G access and are advised to check the carrier’s website for information on the coverage in their specific area.

Over the last years, Cricket Wireless has been promoting its deals in numerous ads featuring the cuddly characters. A recent ad features green mascot Miles having a video call with Brian Posehn and sharing impressions about their beards and getting motivated to work out after a video call with Bárbara de Regil.Besides Miles and Rose, there are also Dusty, the round-shaped yellow one, Ramon, the round-shaped one with brown hair, and Chip, the square-shaped blue one. They were all brought together for the carrier’s 2018 holiday commercial, created by Argonaut, San Francisco, which highlighted that “The best holiday plans are the ones that bring us together”.